Revealed: How NZ’s sporting elite are getting a competitive edge this season

Boost your performance this short season with advice from the coaches and physios who keep New Zealand's top athletes in peak condition.

You might be lockdown fit, but are you match fit?

Even New Zealand's top athletes and teams are approaching their conditioning differently as they return to sport after lockdown. Make no mistake, they too want to get back in the game and crush it – but not at the cost of an extended visit to the bench.

We asked four of New Zealand's top strength and conditioning coaches for their tips for everyone getting back to sports this season:

Steve pre-loads each game with three hours of preparation to help boost performance when he takes the court.

Gavin says players and coaches need to understand that "doing a dynamic warm up is the most important 15 minutes of every training session and every game."

For Steve, his warm up and training is all about performing at his peak, and staying off the injury roster – and so far he hasn't suffered any major injuries and has stayed on court.

2. Look at your post-lockdown condition

"You had the ones who were running marathons in their backyard when there wasn't much space, and you had the athletes who may have been doing interval training between the sofa and the fridge," he jokes.

Despite being fit, your muscles will have lost the condition they need to train and compete, so you'll need to get used to those movements again. The ACC SportSmart dynamic warm up is ideal for that.

That means getting your shoulders, hips and ankles mobile, while your neck, lumbar spine and knees need to be strong for stability.

3. Practice the moves you'll be doing on the pitch

"If you're playing a contact sport and you're jumping, you probably didn't do a lot of that in lockdown." So players need to work on the aspects they've missed out on.

One of the key tools for keeping the Black Caps ready to rock is to track how much training and playing they're doing, and how intensively they're doing it, says Vijay.

If you're doing consistent training over four to six weeks, then you should be fine to play. But if you have a spike in intensity, then be aware that two to three weeks after this is when you're at greater risk of injury.

Monitoring is as simple as noting down what you've done, how many minutes, and how intense it was, for example ranking it on a scale of one to 10. This will help you to see if you've had a spike in load.

"Manage that spike by having good sleep [and] eating well," says Vijay who believes having a recovery strategy in place is key to you reaching your performance potential. Be honest – how often do you do a dynamic warm up and cool down properly before sports activity?

Young athletes eat, sleep and grow all the time. And that growth can have an impact on how muscles respond to exercise.

"If you're working with young athletes, particularly young adolescent boys, who have slept incredibly well, and eaten incredibly well over a 12-week period, they probably would have grown substantially," Netball New Zealand's physiotherapist Sharon Kearney says.

But as a result of that growth, they will have lost some neuromuscular control – in other words, they could be a bit uncoordinated. Regaining that control through proper warm ups, and ensuring you're set up to perform at your best, is critical.

"There's nothing more devastating than a young athlete who's got a huge amount of talent, rupturing their ACL [the ligament that stabilises the knee] at 15 or 16, where potentially it could have been mitigated by doing a lot more neuromuscular warm ups as part of their training."

6. Too much + too soon = throttled performance

Even the Black Caps had issues because of lockdown, says Vijay.

"Since they've been getting back to training, we've noticed a lot more soft tissue niggles. This is quite unusual for the team, because we're generally training and playing all year round.

"It's a combination of that lack of intensity, a little bit of excitement getting back with your friends and training, and just trying to find that balance. We're on top of that now."

You may not have heard this phrase before.

But Vijay uses it often with the Black Caps to describe cold muscles. Muscles need a lot of blood going through them to warm up. Looking after your tendons, which attach muscles to bones, is also important. They act like springs, so you need to do some bouncing and jumping side to side to get that tendon ready for action.

"Always think: muscles need to be warmed up and mobile, then the tendons need to be loaded up like a spring," says Vijay.

Why? Because once you get into that competitive environment, if the tendons aren't ready to do their job, you up the risk of soft tissue injuries.

By doing the ACC SportSmart warm up, you'll be following what elite teams do.

"Warm ups, funnily enough, don't tend to change a huge amount in some of the content between the grassroots and the professionals," Jamie says.

"Some of the warm ups we use in the Black Ferns are the same little games that we play with five and six-year-olds.  People like having fun. It's a great way to get warm up done by stealth."

He says mixing up the warm up is a good idea to keep players on their toes.

"We randomise it because randomisation is what sport is about. We don't always know what the opposition is about to do. You have to react and change."

9. Teams that win generally have the fewest injuries

Sharon says committing to the ACC SportSmart warm up has been proven to cut injury rates.

"Preparing for training is the same as preparing for a game. So, as you head out to those netball courts or football training environments, and if you're using the neuromuscular warm up, then you're preparing not only for training, you're decreasing injury risk.

"If you add that into the game setting – [that's] three times a week – you could be doing a really good job of decreasing injury rate by 40 to 60%."

It goes without saying: the more of your top players on the court, the higher chance of winning the game.

What is the ACC SportSmart warm up?

The ACC SportSmart warm up is a dynamic warm up, also known as a neuromuscular training programme, that you do at least twice a week before training, and before every game. It's for everyone: junior, senior, recreational, amateur or professional. Jamie, Sharon, Gavin and Vijay encourage all teams to do it.
It's got multiple benefits:

There's the general version, based on the FIFA 11+ injury prevention programme, but also code-specific formats for rugby, netball, league, and touch.

"It's the simple movements that occur repeatedly in a game," says Sharon, because it includes running forwards and back, side to side, some jumps, hops, press-ups, and accelerated runs.

"The important thing about that is that if you get better at that movement, your performance is enhanced, but also by getting better... you start mitigating the risks of injuries associated with those particular movements."

Find out more about how the ACC SportSmart warm up enhances performance and keeps athletes injury-free.

The warm up Coaches Guide is available to download from the resources section of ACC SportSmart.

Sport New Zealand has information on what the alert levels mean for sport.

Fit4Football website has information for football players wanting to prevent injuries and improve performance and wellbeing.

LeagueSmart website covers conditioning, warm up and other techniques to get the most out of the games.

RugbySmart is New Zealand Rugby's website with resources for all players, including warm ups, techniques and how to improve performance. 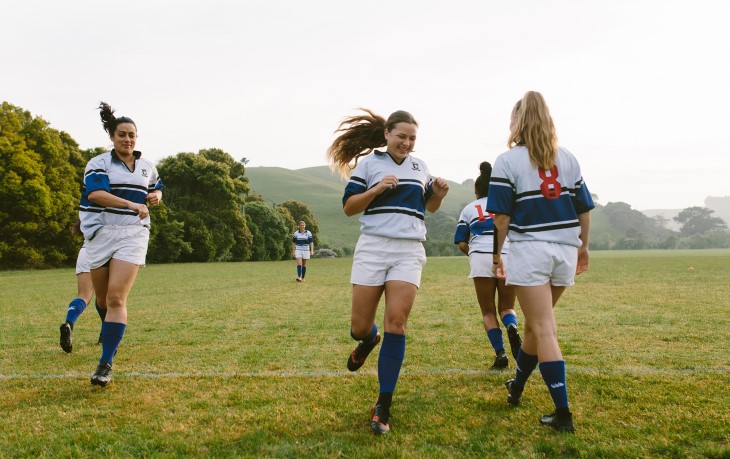 Latest, Sport, Injury prevention
Warming up gives you the edge all season
The winter sports season is shorter this year because of COVID-19 lockdown, so conditioning is more important than ever to make the most of it.
3 minute read

Latest, Sport, Injury prevention
Don’t be like the NFL: How to go from lockdown fitness to high-intensity match fitness
Pre-season training for winter sports didn’t go as planned for anyone this year. Here are some tips to get your performance peaking.
4 minute read
Share