What do you learn from 1,000 motorcycle crashes?

Peter Sowter has seen it all. As a NZ Police crash investigator, he knows what causes motorcycle crashes. Yet he still rides a motorcycle almost every day.

"One morning, on my way [to work], I came up behind a car dawdling well below the speed limit. The opportunity seemed to be there to open the gas and overtake.

"But a PowerPoint slide from my presentation flashed through my mind, and I eased off and braked instead. Just as I did, the car driver turned right in front of me – no warning, no indication, just turned. It wasn’t a close call or anything, because I’d used the brakes straight away.

"If I'd elected to overtake, it would have likely ended the same way those examples had in my teaching, with a loss of life – my own."

As a young man with a love for anything powered by petrol, Peter Sowter hit upon a winning idea to follow his passion and get paid for it. He joined the Traffic Safety Service of the Ministry of Transport – the 'road cops' before its merger with NZ police in 1992.

Peter loved driving and riding around, patrolling the highways. But he was increasingly drawn to understanding what happened in the crashes he attended.

"I’d gone to crashes and thought, how the hell did that happen? Then I moved to Taupo and started working on things like truck rollovers," he says. "My fascination grew with working it out like a jigsaw puzzle."

He trained as an investigator. The more he specialised and learned, the more he felt able to do something helpful.

"I've always liked helping people out in the community," he says. "There's this whole aspect of being able to provide answers to people. Being able to understand what happened – what caused a crash or made it so severe." 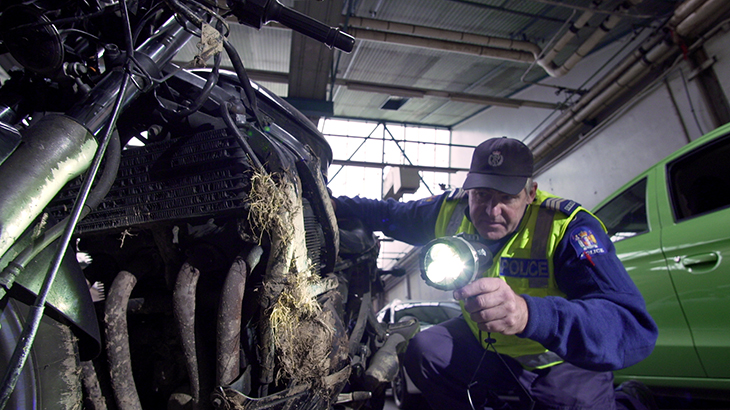 He knows the risks, but he still rides almost every day

Peter specialises in motorcycle crashes. He investigates around 25 to 30 fatal crashes a year. Serious injury crashes outnumber fatalities by a factor of two to three. Then there are many more less serious incidents.

You can learn a lot from analysing hundreds, even thousands, of crashes in such depth. But what is it that keeps him riding a motorcycle, having been exposed to such confronting evidence?

"It doesn’t make sense with the knowledge I have and the job I do," admits Peter.

"If there’s one reason I keep riding it’s because it makes me happy. I love riding, it puts a smile on my face."

It's not just the dopamine rush that keeps Peter on two wheels, though. He cites his exposure to crash causes as playing a part in making better riding decisions. Sometimes, directly so.

"Knowing the risks, I wear all the best gear and do all the training I can to mitigate them."

70%
of all fatal motorcycle crashes.

The SCU has investigated

496
motorcycle fatalities in the last 10 years.

Advice from the sharp end

Plenty of riders blame the road conditions or other drivers for causing crashes, but what’s the reality?

"A four-inch line of paint down the centre does nothing to protect you," advises Peter.

He's encountered some interesting surfacing conditions. Recalling one incident when riding with his wife where a whole section of road was slick with oil, causing the bike to slide all over the place.

"It was terrifying. I’ve never seen anything so bad. And I’ve been to a lot of 'sorry mate I didn’t see you' crashes. It does happen. However, a huge element for why crashes happen is to do with riders' decisions."

Peter's advice is to adjust your riding to the conditions, if the road surface is poor or compromised.

"If it's wet, slow down. If there's gravel, don't blast along, ignoring the conditions, and blame the road. As a rider, we don't always know what that car ahead will do, so why race towards it?

"In the majority of fatal crashes I've investigated in my career, there is a huge amount of rider error involved," Peter says.

"Maybe not accounting for everything that happened, but often it's enough to make the difference between serious injury and a fatality, or a minor that becomes serious. Speed will make it worse."

“
In the majority of fatal crashes I've investigated in my career, there is a huge amount of rider error involved.
”
- Peter Sowter, Sergeant, Serious Crash Unit, NZ Police

What you can do

Even with 35 years of riding under his belt, Peter is a huge advocate of Ride Forever. He’s already taken two Ride Forever courses and is looking forward to taking a third on his new Indian FTR.

"With the new FTR, it’s like relearning how to ride compared to my old Bandit. Skills are perishable, so I really want to do another course and increase my skills and confidence." Like any rider, Peter has had some close calls, ones where it could have been game over for him. But instead, he says what he learnt kicked in, allowing him to maneuver out of sticky situations, and pushing him through motions to avoid a collision.

If a rider does have a crash, Peter has some advice on what to do at the scene.

"Each incident is different, but safety is always paramount,” he advises. But keep these four things in mind:

Finally, Peter says, "Anyone who rides a motorbike should do a first aid course." He does one regularly as a serving police officer.

Learn how to improve your skills and increase your enjoyment of riding with a Ride Forever coaching course. 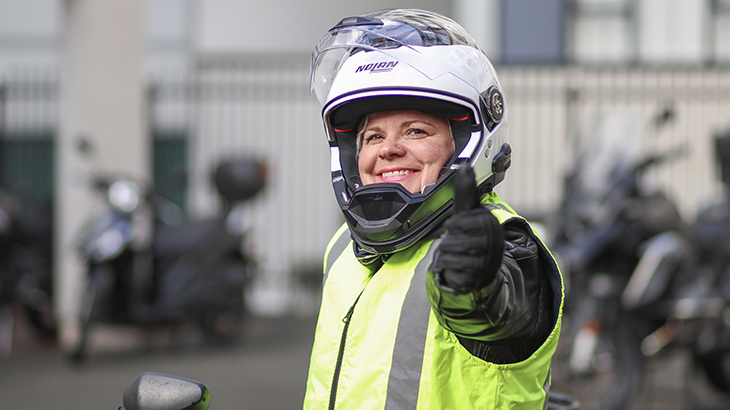 Motorcycles, Injury prevention
Motorcycle Awareness Month: The right gear could save your life
Wearing the right gear for riding could be the difference between serious injury or the inconvenience of minor injuries.
6 minute read
Share